Cilantro or coriander is one the world’s oldest spices. Spanning from 5000 BC to modern times, it has been used medicinally and culinary around the world. In ancient times, countries such as China, India, Egypt, Greece, and Rome used it for both its seed and leaf. It is thought this aromatic herb made its way to North American colonies by the late seventeenth century.

Cilantro is a multi-purpose herb with a distinct flavour. The pungent leaves, called cilantro, are widely used in Asian and Latin American foods such as salsas, salads, and soups. The seeds, known as coriander, are used in meats, pickles, fruit dishes, curries, and chutneys.

Cilantro has visual appeal with its lacy foliage and delicate white flowers. It is one of the best plants for attracting beneficial and predatory insects to your garden. It prefers full sun but benefits from afternoon shade during the heat of summer. The soil should be fertile, light and well drained. It prefers dry summer weather and dislikes humid conditions. 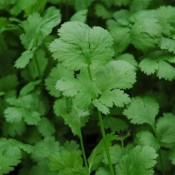 Annual. This versatile herb is fast growing and slow to bolt. The fresh young celery-like young leaves known as cilantro are widely used in Mexican and Asian cuisine while the aromatic seeds called coriander re used as a spice for seasoning meats and pickles. High yields. DID YOU KNOW… Cilantro helps reduce gas and stimulates… Read more »

“A garden is the mirror of a mind.”