Chard was believed to have originated somewhere in the Mediterranean as it was known to the ancient Greeks and Romans. By the sixteenth century, several varieties were available. The word Swiss was used to distinguish chard from French spinach varieties by nineteenth-century seed catalogue publishers. Swiss chard, known as leaf beet and spinach beet, is actually a type of beet that develops lush leaves rather than a fleshy root. It tastes somewhat like spinach and be cooked in the same manner. There are many varieties in an exciting range of colour combinations, making this crop a great candidate for any garden. 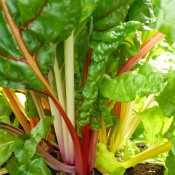 This attractive and colourful chard mix was an All-American Selection Winner in 1998 and recipient of the Royal Horticultural Society’s Award of Garden Merit . Pink, crimson, bright gold, orange, white and mauve stems are radiant beneath slightly savoyed green and burgundy leaves. Very mild tasting. Can be grown in large containers.

“The philosopher who said that work well done never needs doing over, never weeded a garden.”