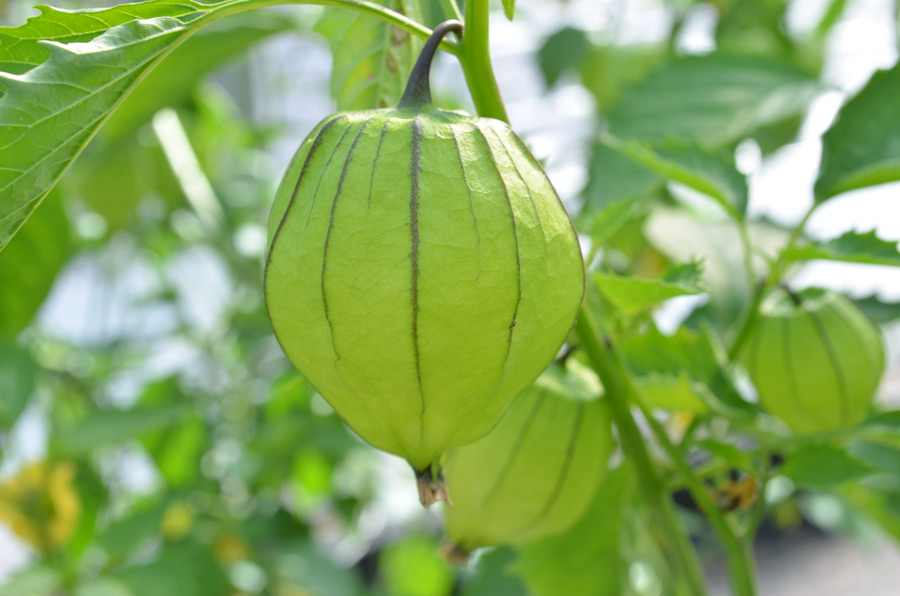 Also known as Mexican husk tomatoes or Mexican ground cherries. Tomatillos are native to Mexico and Central America where the Aztecs first cultivated them as early as 800 BC. They are actually classified as a berry because they have many tiny seeds, but in the culinary world, they are generally used as a vegetable.

A member of the nightshade family, tomatillo literally means “little tomato” in Spanish. They have a very tangy, slightly acidic flavour, which differs from their relative, the tomato. Their growth habit is somewhat similar except that tomatillos are easier to grow, more cold and rain tolerant, and set fruit faster than tomatoes. These large sprawling plants will produce high yields of firm, bright green fruit enclosed in slightly sticky husks. For salsa verde (green salsa), the fruits are best harvested immature when they are green, starting to lighten up on the blossom end. As the fruit matures turning yellow, the husk dries, changes colour from green to brown, and splits open often falling to the ground. Tomatillo plants are self-incompatible, meaning they require pollen from a neighbouring plant to produce fruit. So for best results, plant at least 2 tomatillo plants so blooms can be cross-pollinated in order to produce good yields.

Once harvested, tomatillos can be stored in the refrigerator for about 2-3 weeks, either loose or in the vegetable crisper. They can be used to add a lemony flavour to salsas, moles, and stews. 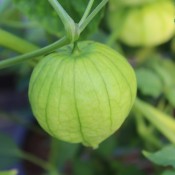 This tomatillo variety is a heavy producer of large, 3 oz apple-green fruit. The medium-sized plant is determinate and won’t require staking. Excellent flavour. Tomatillos have a firmer texture than tomatoes and are more cold hardy. Tomatillos are an excellent source of iron, magnesium, potassium, Vitamin C and K, fiber, niacin, and manganese. Harvest the… Read more »

“A green thumb is nothing more than hard work and the desire to make things grow.”