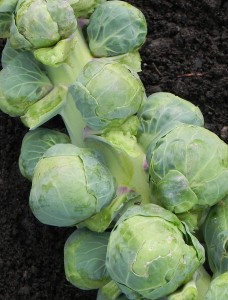 Though Brussels sprouts were developed somewhere in Europe, it is not on record whether their place of origin was really Brussels. A relatively modern vegetable, this nutritious member of the cabbage family was first cultivated in the 1600s or 1700s and didn’t become widely known in this country until the 1920s.

Brussels sprouts tend to arouse strong emotions-people either love or hate them. Opinion probably hinges on the age of the sprouts first tasted: home-grown young sprouts are sweet and delicate, but store-bought older ones have a strong, cabbage flavour and odour and a coarse texture.

Brussels sprouts are a cool-season vegetable and are easy to grow. Brussels sprouts belong to the cole crop family which includes broccoli, cabbage, cauliflower, collards, kale, and kohlrabi. They are peculiar-looking plants that resemble miniature palm trees with lumps-sprouts growing on the trunk. Since flavour is improved by heavy fall frosts, do not harvest Brussels sprouts until late summer or early fall. The sprouts mature from the bottom of the stem to the top, so harvesting each plant is a continuous process over the space of a month or two. One taste of the delicate nutty flavour a crispy, home-grown Brussels sprout and you will never eat another store-bought one again.

It is a great companion to beets, lettuce, calendula, and nasturtiums. Do not plant with beans, tomatoes, peppers, or strawberries. 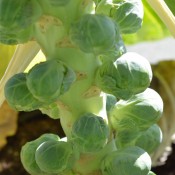 Gustus F1 is an early maturing variety that is an ease to grow and produces heavy harvests from August through October. It produces masses of well-formed, evenly-spaced mid-green round/globe-shaped sprouts. The average sprout measures 1.18 inches (3 cm) and boasts a rich, nutty flavour and firm texture. A perfect variety for Canada and Northeastern USA…. Read more »

“A garden is the best alternative therapy.”