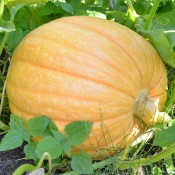 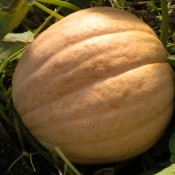 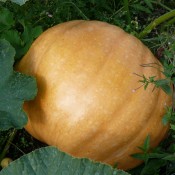 Dill’s Atlantic Giant is the best variety for growing giant pumpkins…..producing world record size pumpkins. Howard Dill, from Windsor, Nova Scotia, was a giant among giant pumpkin growers. He won four consecutive world championships from 1979 to 1982, a feat unmatched by any other grower. He missed winning his fifth title by a mere 5 pounds. The present day world record for the Dill’s Atlantic Giant is 1,689 lbs grown by a man from Rhode Island. The current (October 2008) California, British Columbia, and Canadian record holder is Jake van Kooten from Port Alberni, B.C. whose Atlantic Giant weighed in at a staggering 1,536.5 lbs (697 Kg). Even if you don’t want to grow a ‘record breaker’, it is excellent for pies, carving Jack O’Lanterns, etc. Fruit colour varies from yellow to orange to pink-orange.

If you want to try your green thumb at growing a giant pumpkin, these are Howard Dill’s recommendations:

Nutrition: Pumpkin is full of an important antioxidant, beta-carotene. Current research indicates that a diet rich in foods containing beta-carotene may reduce the risk of developing certain types of cancer and protects against heart disease. It is also a good source of zinc, iron, and fiber. One cup of cooked pumpkin is about 49 calories.

“A garden must combine the poetic and the mysterious with a feeling of serenity and joy.”