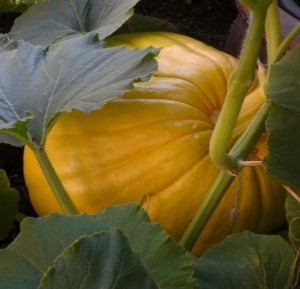 Pumpkins evoke memories of the autumn season; whether placed in a fall or Thanksgiving display or carved into scary looking jack-o’-lanterns. This type of winter squash boasts more than decorative good looks, it can be baked in pies and bread and the seeds can be roasted for snacks.

In the garden, pumpkins love lots of moisture, compost-enriched soil, and plenty of sun. Meet those requirements, and these sprawling vines will bear a bumper crop of orange-skinned pumpkins that you can carve, cook, or store. Pumpkin vines are vigorous, covering lots of ground. To keep your garden from being engulfed by vines, plant seedlings along one edge of the garden and train the vines toward the outside of the garden. Pumpkins need a lot of water when the flowers and fruit are forming otherwise, the fruit won’t develop to full size. Side-dress the plants with compost or balanced organic fertilizer when the first blossoms appear. If a vine sets too many fruits, they will compete for sugars and nutrients, and all of the fruit will be small at maturity. Remove some of the developing fruit from each vine to produce larger fruit, especially for jack-o’-lantern-type pumpkins. If pumpkins lay directly on the ground, they develop a flat, warty, unattractive side. To avoid this problem, place newspaper or cardboard under each fruit. Also, turn each fruit over once or twice during the growing season.

Good companion plants for pumpkin and other squashes include corn, lettuce, melons,  oregano, peas, radish, and squash. Some experts believe that borage improves the pollination, flavour, and growth of squash. Planting flowers such as marigolds and nasturtiums, help repel pesky squash insects. Avoid planting pumpkin and other squash with Brassicas (cabbage, broccoli, kale, etc.) and potatoes. 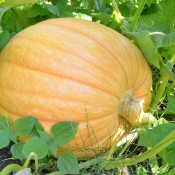 Cucurbita maxima. Dill’s Atlantic Giant is the best variety for growing giant pumpkins…..producing world record size pumpkins. Howard Dill, from Windsor, Nova Scotia, was a giant among giant pumpkin growers. He won four consecutive world championships from 1979 to 1982, a feat unmatched by any other grower. He missed winning his fifth title by a… Read more »

“The garden is a love song, a duet between a human being and Mother Nature.”