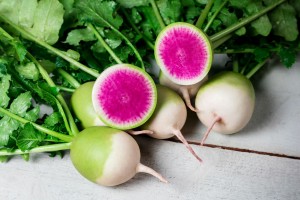 Radishes originated from China and Middle Asia but were known in ancient Rome, Greece, and Egypt.

Stargazer is a stunning type of watermelon radish. Watermelon radish is an heirloom variety of daikon radish first originating from China. They do not taste like watermelon but rather bear a resemblance to the fruit. The upright bright green tops are edible and have a similar flavour as Swiss Chard. This much sought-after gourmet and specialty radish has a unique colour palette. Stargazer has white skin with green shoulders and bright pink flesh with lighter pink streaks radiating from the center. The flesh is crisp and has a mild and sweet flavour and can be used in salads, slaws or pickling. It grows best under cooler conditions. Recommended for spring and fall seasons.

Good companion plants for radishes include beans, beets, cucumber, lettuce, mint, parsnip, peas, spinach, squash, and tomatoes. Some experts believe that planting a few radishes around the mound of cucumber or squash plants and allowing them to grow and bloom, will prevent most pests that bother cucumber and squash. Avoid planting radishes near potatoes.

To store, remove tops of radishes and refrigerate in storage bags for about a week.

“Gardening is the work of a lifetime: you never finish.”